Learning a second language - Participating itself is a Win!

November 27, 2018
Short version:
Vishnu has won an award for participating in a Tamil competition conducted by the Australian Society of Graduate Tamils (ASoGT) (https://www.tamilcompetition.org/). Many thanks to ASoGT and Thaai Tamil School Inc for helping Vishnu learn Tamil.
In a world where winners only are celebrated, participation itself is a big win when it comes to bilingual learning.

Long version:
"Appa, I don't think I will get a prize!"

Vishnu said it to me after seeing few of his peers recited a Tamil poem flawlessly in the Australian Society of Graduate Tamils (ASoGT) annual literary competition.

Growing in an English environment, Vishnu took weeks to memorise and practise the recital, performed it bravely with his low-pitched voice, standing in front of a panel of 5 judges and 30+ spectators. There were many students who put in great efforts and recited the poem fearlessly in a high-pitched, oratory style that made Vishnu think his performance was not prize-worthy.

But, we were so proud of Vishnu's feat and I promised him that I will get a special trophy for participating and completing the Tamil recital in front of a crowd.Vishnu kept saying when he gets his trophy, he can fill it with water and drink it to celebrate. I had no idea where he got that idea from; so I was thinking to get a good quality trophy.

Meanwhile, ASoGT invited all the children who participated in the Annual Competition to get participation certificates.

When Vishnu's name was called upon, they presented him with a certificate and a TROPHY too! As first-timers, we didn't know that participants who completed the competition tasks got trophies. 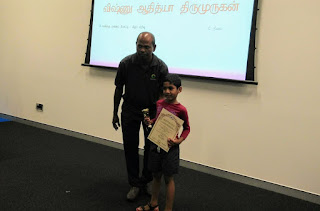 It's a great idea by ASoGT to present trophies for children to appreciate their efforts. Thank you ASoGT for doing this and encouraging students in Australia to learn Tamil.

Vishnu attends Saturday classes at Thaai Tamil School where he learns to read, write and speak in Tamil. He gets to play and socialise with Tamil speaking children there. Within his first year of attending, Vishnu has gained confidence and reads, writes Tamil words. The volunteer teachers at  Thaai Tamil School put in great efforts to teach Tamil to the next generation. Thaai Tamil School conducts similar annual literary competitions to encourage students to prove their Tamil skills.

If you want your child to learn two languages, make the learning of secondary language more fun and rewarding.

Let them learn at their own pace, make mistakes, get to meet other child who learn the same language, compete and get 'special trophies'.

It's all worth it.