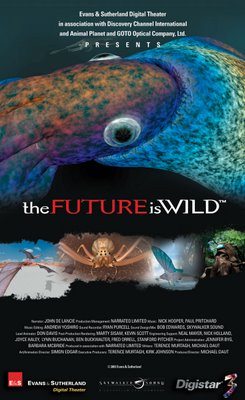 Pic courtesy: Evans & Sutherland
Every one of us know about the earth’s past. Millions of years ago, dinosaurs walked on this planet. Mass extinction happened. Human evolution begun after it.


What will happen in future? Million years from now. Probably after the mankind leaves the earth (extinction or other planet). The climate and lanscape change beyond recognition, which cannot possibly support humankind.

Future is wild is a series of documentaries which looks at the future state of our planet earth in 5, 100 and 200 million years in to the future.

Bizarre animals, strange plants inhabit the earth. All continents merge into a single ‘Super Continent’ surrounded by a great ocean. You have to see it.

This series is available in a 3-set DVD pack. Alternatively search for it in the nearest library. Adelaide City Council libraries have these DVDs.