Call her the Friday to Friday star. Round eyed, chubby cheeked, winking at you, from strategically placed hoardings at many traffic lights. She is the Amul moppet everyone loves to love (including prickly votaries of the Shiv Sena and BJP). How often have we stopped, looked, chuckled at the Amul hoarding that casts her sometime as the coy, shy Madhuri, a bold sensuous Urmila or simply as herself, dressed in her little polka dotted dress and a red and white bow, holding out her favourite packet of butter.

For 30 odd years the Utterly Butterly girl has managed to keep her fan following intact. So much so that the ads are now ready to enter the Guinness Book of World Records for being the longest running campaign ever. The ultimate compliment to the butter came when a British company launched a butter and called it Utterly Butterly, last year.

It all began in 1966 when Sylvester daCunha, then the managing director of the advertising agency, ASP, clinched the account for Amul butter. The butter, which had been launched in 1945, had a staid, boring image, primarily because the earlier advertising agency which was in charge of the account preferred to stick to routine, corporate ads.

In India, food was something one couldn't afford to fool around with. It had been taken too seriously, for too long. Sylvester daCunha decided it was time for a change of image. The year Sylvester daCunha took over the account, the country saw the birth of a campaign whose charm has endured fickle public opinion, gimmickry and all else. 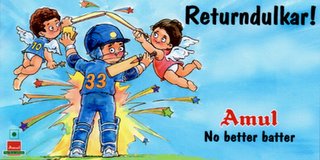 The Amul girl who lends herself so completely to Amul butter, created as a rival to the Polson butter girl. This one was sexy, village belle, clothed in a tantalising choli all but covering her upper regions. "Eustace Fernandez (the art director) and I decided that we needed a girl who would worm her way into a housewife's heart. And who better than a little girl?" says Sylvester daCunha. And so it came about that the famous Amul Moppet was born.

By the way, Happy Thanksgiving!