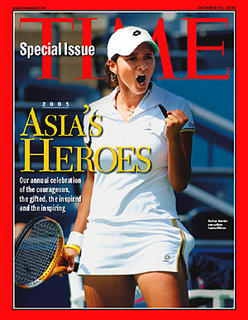 //But it's her singles game that has truly taken off in the last 12 months. A series of stunning performances has pushed her world ranking from 326 to 37, which means she has risen faster and further than any other player this year—male or female. Besides the last 16 of the U.S. Open, she won her first WTA title on home ground in Hyderabad in February, and made the final of the Forest Hills Classic in New York in August. "Her best tennis is incredible," said U.S. Open victor Kim Clijsters during a press conference. "She's probably hitting the ball a lot harder and cleaner than a lot of the top girls." Unbecoming, perhaps, for a traditional Indian Muslim girl. But cute, in a way.//

Text and Image from http://www.time.com/time/asia/2005/heroes/sania_mirza.html